The Strahov Monastery and Library

The Czechs have been drinking beer since time immemorial. Emperor Rudolf II’s personal physician held that beer was an incredibly healthy beverage and wrote a treatise to that effect. The Czech beer industry’s worldwide fame dates from the Renaissance, as does the Bohemian tavern which is famous throughout Europe. 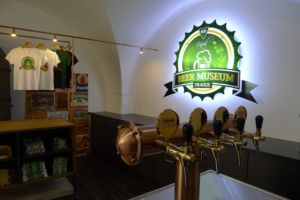 No boring Museum, but the Museum of Czech beer,
right in the Centre of Prague. A place to love you back.
CONTACT: Czech Beer Museum, Husova 7, 110 00 Prague 1  MAP
Facebook:fb.com/czechbeermuseum
Official website:beermuseum.cz

Beer and the drinking are ingrained in Czech culture, society and history. So much so, that the beer industry is considered a part of the national heritage. After the split of Czechoslovakia in 1993, the Czech Republic achieved a major beer victory: first place in beer consumption per citizen. In 2003, the Czechs drank an average of 161 liters of beer per person. That’s a bottle of beer for every man, woman, and child in the Czech lands every day. 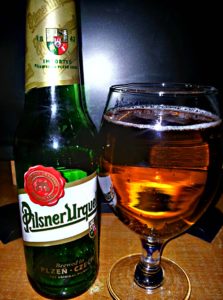 Czechs prefer to do their beer-drinking in pubs rather than at home.
Drinking beer is an opportunity to meet with friends. The milieu in pubs
and country inns is gregarious, the discussion are forthright. The subjects
can be anything under the sun: football, ice-hockey, politics and women.
Draught beer is normally served in half-liter glass mugs. There’s
light-colored (svetle) beer, which comes in ten-degree and twelve-degree
varieties, and has more of a bitter flavor. Then there’s also ten-degree
dark (tmave), or black (cerne) beer, which is generally sweeter. Light beer
is more popular, although dark beer is gaining ground.

A famous advertising slogan once proclaimed: „Beer is the best”. It didn’t specify which brand. It is impossible to say which Czech beer is the best. Radegast has won the Czech beer of the year three times in a row. Velkopopovicky Kozel won the gold medal for beer as well. Gambrinus is probably the most popular. Of the classical beer styles, mostly bottom-fermented beer is brewed in the Czech Republic – that means lager (lezak), but especially, it means Pilsner beer.

Pilsner is without a doubt the world’s most famous style of beer. Outside of the Czech Republic it is usually spelled Pilsener or abbreviated to Pils. Pilsner originally described beer from Pilsen (Plzen). For Czechs it means beer from Plzen and nothing else. The term came into use, when the brewery in Pilsen (Plzen) developed a beer in 1842 known as Pilsner Urquell.

This is a pale golden-colored beer of 12 degree, with a characteristically well-hopped palate (Bohemian hops are used of course).
Czechs drink mostly Czech beers. In order of popularity: Pilsner Urquell, Gambrinus, Radegast, Velkopopovicky Kozel, and then a long list of beers brewed in the smaller regional breweries. A wide range of beers is available, with more than 80 breweries in the Czech Republic.