The most beautiful city in the world… Prague

The most beautiful city in the world… Prague 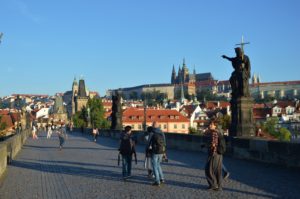 Charles bridge, with a view of Prague Castle

The most beautiful city in the world…  beautiful Prague

Beautiful Prague, City of a Hundred Spires, a UNESCO monument and one of the most beautiful cities in the world. Get to know it in person! Get to know the unique story of the city which history has attributed nicknames to such as “Stone Dream” or the “Golden City” and get to know its greatest jewels.

“Next up in our poll of the most beautiful cities in the world is Prague, a city of two sides: by night it’s a buzzing metropolis with a hedonistic party scene, but by day you can lose yourself in a warren of quaint cobbled streets, or spend an afternoon admiring the view from the Charles Bridge, stretched across the Vltava, up to the castle.”

text: The Rough Guides Limited, The most beautiful city in the world – as voted by you, roughguides.com/gallery/most-beautiful-city-in-the-world/

From the Czech Tourism´s review of Prague:

“The Old Town Hall with the famous Prague Astronomical Clock. The winding lanes of the Jewish Quarter, which you know from the novels of Franz Kafka, steeped in the legend of the Golem. Cafes enticing you to come and have a seat, boutiques and sight-seeing cruises on the Vltava. The Gothic Charles Bridge and Church of St. Nicholas in the Lesser Town, the most beautiful Baroque church in Prague. The Palace Gardens set away from the bustle of the city, Petřín with a lookout tower reminiscent of a small Eiffel Tower and Prague Castle … Each of Prague’s districts has its own characteristic atmosphere and unique charm. Prague presents itself to you as a changeable city, which likes to alternate styles: it is romantic and successful, ancient and modern, but above all it is a city that is cosmopolitan through and through, and is used to welcoming foreigners. It is time to get acquainted.”