The Hangar Bar Prague / Pilot’s Lounge is situated on the upper floor of the bar. And, it is inspired by the boom of the passenger aviation led by the Pan Am Airlines in 1940-60’s. At that time, they introduced the first transatlantic passenger line and employed the first stewardesses on their flights. The first stewardesses working for Pan Am were qualified nurses. The Pan Am aircrafts of the era abounded in luxury and only the super-rich could afford a ticket. That’s why beautiful stewardesses often got acquainted with rich businessmen on Pan Am flights which made the job an aim of countless beautiful young girls. On the upper floor, you can see fascinating historical enamel signs advertising various destinations offered by Pan Am. The centerpiece of the interior is the body of a Clipper aircraft which could land on water for re-fuelling so that it could span such great distances as the Atlantic Ocean. The Pilot’s Lounge is a great place to enjoy original cocktails, coffee or delicious food prepared by our chefs.

The bottom floor of the Hangar Club is inspired by the era of 1940-50’s.  Especially by the Hollywood stunt pilots, the WW2 pilots, aircraft mechanics, and all you could find in a last century’s hangar. The star-shaped aircraft engines hanging behind the bar counters dominate the design of the interior.

The atmosphere of the Hangar Club emphasizes the recklessness of the pilots of the era related to their need to unwind after demanding and often extremely risky flights. In the Hangar Club, you will encounter a wild atmosphere created by our show bartenders, with the show going on till the morning hours.

The Hangar Bar Prague is a stylish establishment with the original atmosphere of 1940-60´s aviation. It combines the style and beauty of the pioneering Pan Am Airlines in the upper-floor Pilot’s Lounge with the recklessness of the stunt and military pilots in the Hangar Club placed on the bottom floor.

In Hangar Bar Prague you can enjoy your cocktail and meal in peace, or experience a wild atmosphere with the show going on till the morning hours. The Hangar Cocktail Bar, Music Club and Restaurant is located in the popular cocktail-bar quarter in Dušní 9, Prague 1. 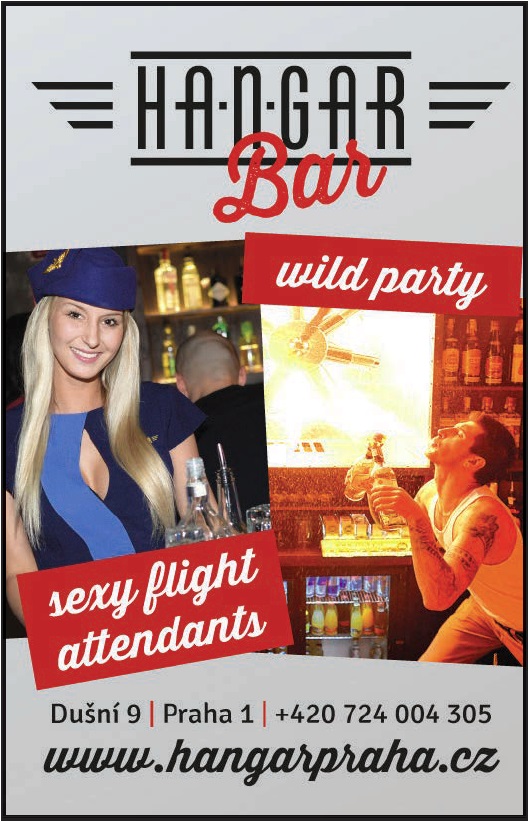