The Mirror Maze on Petřín Hill is a favourite spot for children and adults alike. From the outside, this building looks like a small castle, but inside you’ll find a labyrinth made of mirrors: 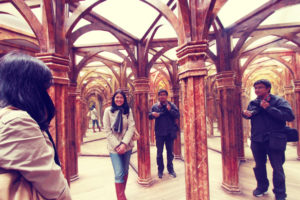 Then, there is the diorama of the battle of the Praguers against the Swedes at Charles Bridge in 1648:

Finally you will experience the “hall of laughter” where warped and twisted mirrors will change your appearance in crazy ways.

Originally, the Mirror Maze on Petřin Hill was built as an exhibition hall for the Czech Tourist Club at the General Land Centennial Exhibition in 1891.

The wooden structure of the maze was originally situated near the corner of the Industrial Palace. Two years later, it was relocated to Petřin Hill near the observation tower.

Over time, mirrors were installed in the two side halls. The left hall (the Hall of Laughter) was equipped with convex and concave mirrors in 1911.

There are 35 ordinary and 15 distorting mirrors in the mirror maze altogether.Thus, the structure reflects the ideas of the Gothic building style at the end of the 19th century.