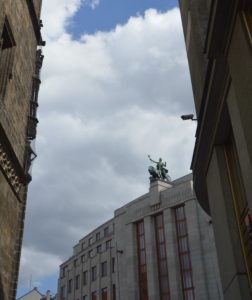 Perhaps the finest aspect of the National Bank building is the statue that remains at its crown, called the “Genius with the Lion”. 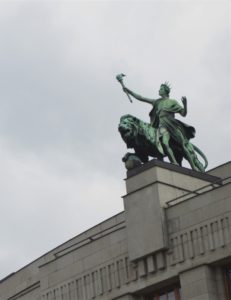 The metal statue perched on the attic gable of the bank at Na príkope 28 was created in 1898.

In 1938, it was transferred to the new, present-day bank building.

The statue is a symbol of progress and liberalisation of trade.

It comprises a figure of a striding genius in a fluttering robe. In Roman mythology, a genius was a tutelary deity or guardian spirit sometimes depicted as a winged or haloed being. The figure is holding aloft a flaming torch. At his side is a lion holding a ball under its front right paw. The ball is marked with the date of the statue.

Apart from the statue of King George in Podebrady, it is the only major beaten-metal statue in the Czech Republic.

A similar technique was employed for the Statue of Liberty in the USA, for example. The skeletons of both the genius and the lion are firmly held together with bolted joints. The only free part is the torch, weighing 12 kg. The statue was designed by Antonín Popp and built by the Hofman firm.